The name "Parisienne" is obviously derived from the term used to describe residents of Paris. As the Parisienne was to be a model available primarily in Canada it no doubt was seen as a fitting tribute to the significant numbers of French speaking residents in Canada who naturally also represented a large slice of the local [Canadian] market. But the Parisienne name association with General Motors didn't simply come about as a last minute marketing pitch.

General Motors first used the name in 1953 but, to appreciate the story, it is necessary to go back a little earlier to set the stage.

When Civilian motor vehicle production re-commenced after World War 2 they were typically updated pre-war models but, within a few years, all-new models were released, and were well received by the buying public. It was a progressive era with a thirst for futuristic ideas. General Motors responded to this interest in the late 1940's with exhibitions aimed to gauge public preferences in potential car styling as well as to generate interest.

The first exhibit was titled "Transportation Unlimited" and opened in the New York Waldorf-Astoria in 1949. These exhibitions were very popular indeed and in 1950 the name was changed to "General Motors Midcentury Motorama" to further capitalise on the futuristic flavor. The 1950 Motorama attracted 320,580 visitors.

Motorama returned in 1953, bigger and better than ever before. Opening once again in New York's famous Waldorf-Astoria hotel on 49th Street, the Dream Car concept was introduced and there had been over 300,000 visitors in 7 days. After New York (17th to 23rd January) the Motorama when on tour visiting Los Angeles, Miami, San Francisco, Dallas and Kansas City and attracted over one million visitors overall. Concepts on show wore names that included Cadillac LeMans, Oldsmobile Starfire, Pontiac Bonneville Special, Pontiac Parisienne, Buick Wildcat I, Buick LeSabre, and Buick XP300. Also on show was a new sports car concept called Corvette. Public reaction to the Corvette was so positive that within 6 months it lost its title of concept car and entered production.

The 1953 Motorama also displayed the Cadillac Orleans which debuted the idea of a four door hardtop. General Motors' Chief Designer, Harley Earl had come up with the idea and he noticed at the Motorama that the public were fascinated by the prospects of four doors, four seats, a fixed metal roof and the dramatic styling opportunities provided by pillarless construction. The Pillarless sedan debuted as an industry first for the 1955 Buick and Oldsmobile models and the following year the Cadillac Sedan De Ville was released and became an instant hit , outselling every other Cadillac in that year. 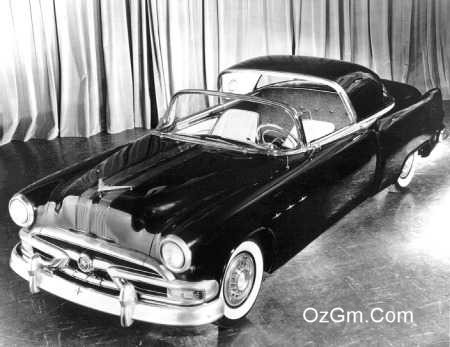 Whilst most cars at the 1953 Motorama were a preview of up and coming designs or pure concept cars, the Parisienne name was given to a display which was more retrospective. It combined the elegance of a 1930's chauffeur-driven landau limousine with that of a 1950's two-door sports coupe. Riding on a standard 122" chassis and powered by a Pontiac straight 8, it had "Roulette Pink" leather buckets seats in the front and the carpet was black broadtail fur. And supposedly there was a plexiglass dome to enclose the driver's compartment just in case of rain.

Whilst the 1953 Parisienne bears no resemblance to the production models that eventually wore the name, the display did establish a favourable reaction to the name and an association to stylish comfort. A few years later GM of Canada found that they needed to have an up-market sub-series for the Laurentian to satisfy those customers requiring more than just the base model. When it came to selecting a name, Parisienne was an obvious choice. It had been well received in 1953 and was relevant to the French consumers in Canada. Also returned World War 2 Service personnel had witnessed the then unique features of European makes during their time abroad and the name Parisienne would create an association that would position the car clearly in the intended market.

The Parisienne Sports Sedan not only derived its name from the 1953 GM Motorama but the ever popular pillarless styling, that is characterised no better than by the mid to late 60's as a unique era of automotive styling, can also be traced back to the same event. It was the flagship of General Motors Holden (Australia) until production ceased in 1968 but the name continued in Canada (and other countries) and in a particularly unique turnaround, the name returned to the United States some 30 years after its original display.

What became of the 1953 Parisienne? Apparently it was updated in 1954 with a new grille and a different color exterior either to re-appear at the Motorama or simply as a styling exercise. The standard direction from GM lawyers was that Concept Cars had to be destroyed because they were not necessarily engineered and constructed with normal roadworthiness in mind. Accordingly the orders would be issued for the legal advice to be followed. However many within GM, particular those that worked on the projects, could not bear to see this happen to these hand-built works of art and a number of Concept Cars were secretly saved on the proviso that they don't re-appear until after the bosses' retirement! Fortunately this was the case for the Parisienne and despite the "destroy order" it was found in a New Jersey junkyard in the 1980's. It was restored back to its 1953 form by Joe Bortz and proudly takes its place amongst his world famous Chicago based collection of Automobiles.

From time to time the car is made available for special shows such as the Concept Car show held in Chicago in 1997. This time the display had 19 one-of-a-kind concept models and/or limited production cars, far more than any of the earlier Motoramas, from both private collections and other museums. Organised by the Museum of Science and Industry in Chicago and sponsored by Ford Motor Company, the display drew cars from the National Air and Space Museum, the Smithsonian Institution, the Detroit Historical Society, the Imperial Palace Museum, the Auburn-Cord-Deusenberg Museum, as well as the Bortz Auto Collection.

Email your comments, information and suggestions to ozgm@ozgm.com

© All Information and material on this site is copyright. Reproduction without written permission and acknowledgment is prohibited.  Version 10, .